INDIANAPOLIS — Ronald Turco has conducted critical research in his 30 years at Purdue University but his current project is the first to be vetted by federal drug agents.

An agronomist, Turco has spent months clearing hurdles to begin the first legal production of industrial hemp in decades in Indiana. Facing questions from the U.S. Drug Enforcement Administration was just one of many steps in getting the cannabis seeds into the ground.

“You can’t just open up a catalog on the Internet and buy the stuff,” he said. “It’s not like ordering a couple bags of seed corn that just show up on your doorstep the next day.”

Instead, Turco’s research has been months in the making, starting with last year’s federal Farm Bill that re-opened the door for hemp production as a cash crop after decades of prohibition. Congress allowed states and universities to grow hemp for agricultural research provided that they get waivers from the DEA.

Purdue researchers see a future for hemp in Indiana – in fiber, food and a host of other uses. But the plant from which it comes, cannabis sativa, is technically a Schedule 1 narcotic that’s illegal to grow and possess. Variations are also used to produce marijuana.

That’s why Turco had to wait for a DEA permit before he could order a 50-pound bag of seed from a wholesaler in Canada, where growing hemp is legal.

The cannabis strains that Turco and colleagues will plant, as soon their rain-sogged research field is dry, lacks the punch of the marijuana preferred by potheads.

Levels of THC – the psychoactive chemical in marijuana – will be .3 percent or less in their hemp. The recreational drug sold legally in Colorado has TCH content has high as 35 percent.

“It’s become the joke around here: You can try to smoke the entire field, and you’ll get cancer before you get high,” Turco said.

But security remains tight, even as Purdue researchers work to educate the public about what they’re doing. Turco and his colleagues underwent criminal background checks and submitted detailed plans to the DEA.

“That’s an agency we don’t want to get on the wrong side of,” he said.

Turco plans to get hemp seeds in the ground by June 1. The exact location of the two-acre field, which could yield thousands of hemp plants, is being kept under wraps.

Indiana Seed Commissioner Robert Waltz, who is overseeing the project as the state’s “hemp czar,” said State Police know where the plants will be cultivated, as does the DEA.

Nefarious growers, authorities fear, could use a field of cultivated industrial hemp as cover.

But Waltz and Turco don’t think pot growers will sneak THC-rich plants into their fields.

Another reason for the security is to keep away the ignorant or curious.

“We don’t want trespassers. We don’t need sightseers,” said Turco. At least not yet.

This summer, his team will hold a “field day,” open to other researchers and farmers who’ve expressed interest in eventually growing industrial hemp. They’ll also launch a website and accompanying mobile app, to document their progress.

Some Kentucky farmers are already growing hemp in a pilot project with Kentucky’s Department of Agriculture. The DEA warily OK’d that project, but only after first seizing 250 pounds of seeds imported by the state from Italy last year.

In Indiana, the General Assembly helped clear the way for the Purdue project with legislation last year that limited hemp research to universities, under state supervision.

An attempt to broaden the measure failed this year, when state lawmakers killed a bill to exclude industrial hemp from the definition of marijuana to allow farmers here to begin growing the crop.

Turco and Waltz say the landscape will change if Congress passes the Industrial Hemp Farming Act of 2015, co-sponsored by Senate Majority Leader Mitch McConnell of Kentucky. That seeks to exclude hemp from the drugs regulated by the federal Controlled Substances Act.

Turco and his team will look at 10 varieties of hemp — there are more than 100 — which they will plant both organically and using a more traditional method that involve pesticides.

There’s other work to be done, including determining demand for a hemp crop. Indiana lacks a processing facility to transform hemp stalks into textile-grade fiber that would be marketable on a large scale.

And under current federal law, it’s illegal to transport hemp out of state for processing.

Turco’s best guess is that hemp will be in production in Indiana as an industrial crop within five years, if the legal and marketing issues are resolved.

“We’re not going to have little roadside stands of hemp popping up anytime soon,” he said.

Maureen Hayden covers the Statehouse for CNHI’s Indiana newspapers. Reach her at mhayden@cnhi.com. Follow her on Twitter @MaureenHayden 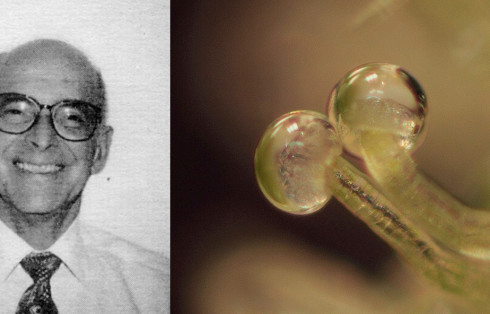