The meeting was organized by the Indiana section of the Hemp Industries Association (INHIA), and led by Purdue staff responsible for implementing Indiana’s 2014 law (IC-15-15-13) providing for the production and regulation of industrial hemp.

Participants in the meeting included:

Ron Turco served as moderator. He opened the meeting by distributing a timeline of hemp activities since February 7, 2014, and then turned to Larry Nees to elaborate on the timeline and to report on activities since March 12th. Dr. Nees stated that the delay in response from the federal Drug Enforcement Administration (DEA) to the repeated written requests from the Seed Commissioner’s office for legal authority to conduct research was caused by confusion in DEA over the roles of Purdue and the Indiana Department of Agriculture.

By a December phone conversation, initiated by John Partridge of DEA in Washington, DC, Nees was able to clarify the role of Purdue as codified in IC-15-15-13. Once Partridge was satisfied on this point, Nees reported that he and others at DEA became very cooperative and outlined the steps that Purdue should follow to establish a credible research program. Indiana’s law differs from all other states in that full authority for hemp is assigned to Purdue rather than to an executive department of state government.

After Seed Commissioner Waltz issued licenses in February (pursuant to IC-15-15-13) to Turco and Beckerman for their research program, it fell to DEA to issue the federal licenses and the seed import permits. In mid-April DEA issued the necessary license “to produce cannabis”, and provided the seed import permit on May 2. This import permit is very specific. It limits the quantity, source, and port of entry, and stipulates that the biomass of the seed volume will contain 0.3% THC or less. Fifty pounds of seed are now enroute from Canada. All material produced must be destroyed at the end of the season.

Turco and Beckerman intend to plant two acres this year, with plans to increase the acreage to ten next year. (The DEA authorities cover 2015 and 2016.) The planting will occur at a location near the West Lafayette campus. They have ordered six oilseed cultivars, two fiber cultivars, and two “hybrid” strains. They intend to use a split plot design for each cultivar, one under conventional production process and one as organic.

They report strong interest on the part of farmers across the state, and therefore will involve the extension service from the beginning, providing complete information about planting, soils, growth, pest management, phenology, and yields. Late summer field days are in the works, one for interested farmers, one for law enforcement, and one for industrial interests. This program has also attracted considerable press interest from the ag media in Indiana and beyond, as reported in a Terre Haute Tribune Star article.

An interesting point was raised by Turco on the subject of federal grant money for research. The DEA license to Purdue qualifies any related research for federal support, which is emphatically denied otherwise for projects involving cannabis. This would apply not only to agriculture research funding, but also to other federal grantors like the Small Business Administration and its SBIR (small business innovation research) program. This new interpretation of grant rules could open other doors at Purdue, such as its Center for High Performance Buildings and the Manufacturing Competitiveness Center – industrial hemp could play a role in these and other university departments and centers.

The industry representatives in attendance all expressed their interest in obtaining hemp fiber or hemp seed from local growers. Any cellulose waste could be converted to energy and biochar as suggested by Peter Schubert, director of Purdue’s Lugar Center for Renewable Energy. This process involves pyrolysis of the cellulose, producing hydrogen for energy use and biochar, a valuable soil amendment and CO2 sequestrant.

Next steps will follow the Purdue field trials this summer, the efforts in Washington to delist industrial hemp as a narcotic, and begin defining possible primary processors of hemp fiber. 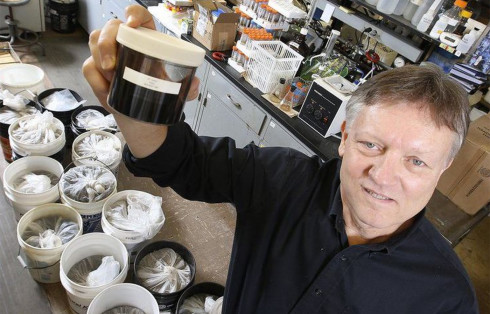