Industrial Hemp: Past and Present

Industrial Hemp: Past and Present

Get your Pinterest recipe ideas ready! Hemp has now arguably earned the ever so alluring title of being a superfood because of its generous supply of protein, fiber, essential fatty acids, and many other nutrients. In addition to its amazing nutritional benefits the plant provides much more value yet. In fact, hemp can be found in more than 25,000 food and non food products around the world — quite the industrial reach. With something as incredibly universal as Hemp, the history of the plant is definitely worth taking a look at… and yes there is a really awesome video linked below for all of you who limit your history intake strictly to the history channel and not a history book.

The History of Industrial Hemp 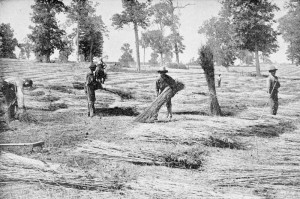 The cultivation and use of industrial hemp long pre-dates the United States, but history shows that, in 17th Century America, farmers in Virginia, Massachusetts, and Connecticut were ordered by law *gasp to grow hemp for use in rope, cloth, paper, and many other products… For over 200 years in colonial America, hemp was an acceptable payment for one’s taxes, somewhat of a “green gold” if you ask me. Hemp was even grown by George Washington and Thomas Jefferson , and Thomas Jefferson wrote original drafts of the Declaration of Independence on hemp paper. Clearly hemp was a part of the original American dream, go hemp!

Hemp products have been commonly used throughout history, and industrial hemp was cultivated in the U.S. even as recently as World War II when the U.S. Government was promoting its “Hemp For Victory” campaign, a national effort to increase supply. But, even with so much of the country’s history tied to industrial hemp, confusion over the plant’s chemical properties (a nice way of saying people found it really hard to understand the difference between the more famous marijuana and industrial hemp, an economic gold mine with unlimited potential) to its eventual ban as part of the 1970 Controlled Substances Act.

I would say some lobbyists were pretty good at their jobs… which leads us to the present day state of hemp.

Despite the ban on hemp cultivation, U.S. retailers have continued selling hemp products by importing them from Canada, China, and other major countries in which the cultivation of industrial hemp still thrives. This has created a unique scenario in which 100% of the country’s $620 million in hemp products sold annually must be imported from abroad, preventing U.S. producers from sharing in any of the profits (ouch).

This statistic has not gone unnoticed. On February 10, 2014, President Obama signed the U.S. Farm Bill into law, which included a significant provision removing federal barriers to hemp production in states where pro-hemp legislation had already been enacted. The new law recognized the legal differences between industrial hemp and marijuana, and represented the first time that “industrial hemp” had been defined by federal law since the plant was banned under the 1970 Controlled Substances Act.

Since then, the U.S. Farm Bill has encouraged many state legislators to reconsider their positions on industrial hemp. Though global hemp production sank to its lowest levels in the early 1990s, the U.S. is now seeing a historical resurgence that could restore American hemp to its proper position in the marketplace. Hemp hemp, hooray!

Will I get high from eating hemp seeds?

No. But you will get high on happiness that you are getting amazing nutrition! (Okay a little over the top but seriously, it is great for you)

Will I get in trouble for having the hemp protein with me at the gym?

No. So be bold and pack it next time you go to the gym.

Can you smoke hemp seeds?

*stifles back laughter*, No…sorry bud. I guess you could, but probably wont get the results you’re aiming for.

If it really isn’t marijuana then why is hemp illegal?

*sigh* *sends them to this blog post and refrains from ranting*

But if you use lotion with hemp in it, won’t you smell like pot?

NO. We promise! Check these products out and let us know.

Will I fail a drug test if I eat hemp?